One of the challenges of this journey was the receiving of gifts.  Having learned as a child that giving presents is 'better' than receiving and wanting to be good and kind I developed a preference for giving over receiving.  Indeed I often feel embarrassed or awkward about receiving - sometimes feeling unworthy of the gift or uncertain what is expected of me in return.  And I always feel that I must give SOMETHING in return!

So this journey began with my first challenge to that: the whole journey was a gift paid for by the generosity of the supporters of my fundraising campaign.  This blog is my way to offer something in return!

Then the flights out to Almaty happened to be on my birthday and I was given gifts by the flight crews.  These I simply had to receive as there was no way of giving in return!


I had taken a present for Svetlana, the Reiki master I stayed with in Almaty, to honour the gift of being able to stay in a local person's home and being met at the airport at 2 am.  I was therefore surprised when she gave me some gifts at the end of my stay.  However I saw that it would be rude to refuse, so accepted them with gratitude.  One of these gifts was a beautiful pair of embroidered felt slippers with toes that turn up.  I learned that this is supposed to be so that when you walk on the grass you don't harm it.  The other gift was a model yurt also made of felt which even has the bed and table inside.  Although many people now live in houses in towns and cities many of them still have yurts where they spend the summer - we saw some on our day out to the lake.

During the retreat several people came up to me with various gifts which it was clear it gave them great pleasure to give. 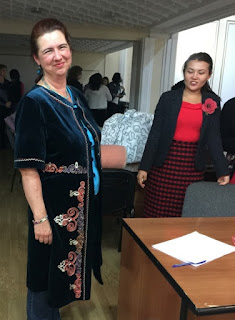 I learned more about this aspect of Kazakh culture of when one afternoon I admired the Kazakh embroidered coat a fellow participant was wearing. "If it fits you, it's yours" she responded and insisted I take off the jacket I was wearing to try it on. It fitted! I protested that I couldn't accept such a generous gift, but she insisted, telling me that it was a tradition in their culture that when a guest comes to stay in your yurt you would give them a gift of a sheep or goat or one of these coats!  At a fundamental level this is to sustain life, I realised.  So I accepted and show my gratitude by wearing it.  I know that it gave her as much joy to give it as it does me to wear it!

I also received gifts from people from other countries in the region who were at the retreat; it seems this tradition of honouring guests with gifts is widespread in the former Soviet Union countries.

I think one of my other favourite gifts was a carrier bag that contained 2 boxes of Kazakh tea, two packets of toasted sunflower seeds and a packet of sunflower seed halva.  I loved this gift because it was what was available at the local supermarket - and also something I have been able to share with others on my return home when I made Kazakh tea for some of my students at a workshop.

I had taken some things to give as gifts too and enjoyed giving them.  They were only very small things - such as some of my postcards, lavendar bags and a tea spoon rest with a robin on it and so on - but seemed to bring pleasure to those who received them.

The other gift I took to share of course (as well as the Reiki) was the songs, which I think brought joy to the whole group.

Overall I feel I received far more than I gave, but that's OK.